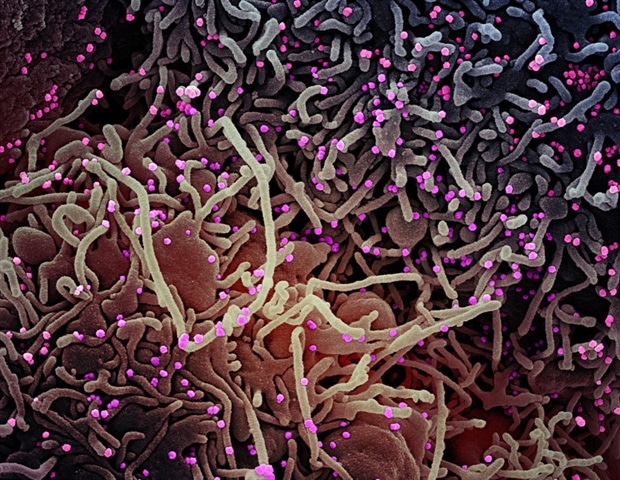 A research group from Harvard Medical School reported two cryo-electron microscopy structures derived from a single preparation of severe acute respiratory syndrome coronavirus 2 (SARS-CoV-2) spike (S) protein in their paper available on the preprint server bioRxiv*. Understanding the nuances of prefusion and postfusion conformations shed light on viral cell entry and may, in turn, guide the development of vaccines and drugs. 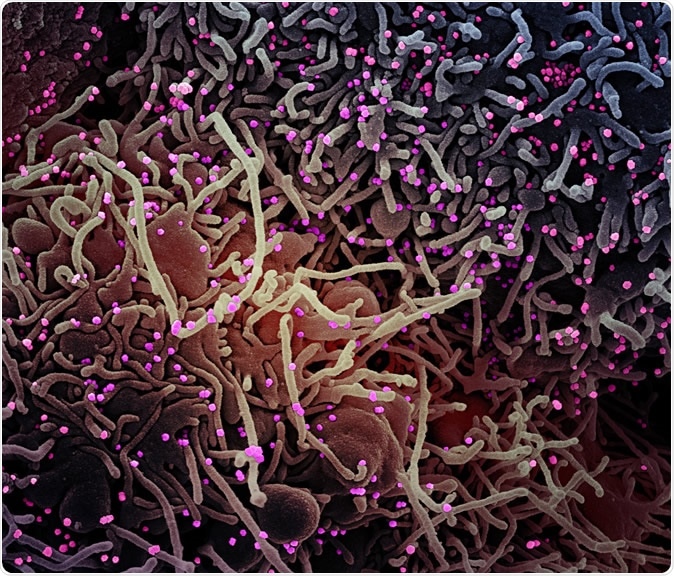 The current pandemic of coronavirus disease 2019 (COVID-19) reached nearly every corner of our planet. Due to its high case-fatality rate and catastrophic economic and social repercussions, both SARS-CoV-2 and COVID-19 became the top research priority of scientists around the world.

Membrane fusion represents a pivotal early step for all enveloped viruses in order to enter host cells and establish the infection. Albeit this is an energetically favorable process, there are high kinetic barriers when two membranes approach each other before fusion, primarily due to hydration repulsive forces.

The fusion protein for coronaviruses is the S-protein that decorates the surface of the viral particle as an extensive crown, which is how these viruses were named in the first place. The protein also instigates the neutralizing antibody response, which makes it an important target in vaccine development endeavors.

In short, the viral S-protein forms a trimer and catalyzes fusion between viral and target cell membranes, which is the first step of infection. This is why a research group decided to appraise distinct conformational states of SARS-CoV-2 S-protein in order to further inform the development of vaccines and therapeutics.

In this study, a fully wild-type form of SARS-CoV-2 S-protein was expressed in human embryonic kidney 293 (HEK-293) cells, which are widely used in cell biology research. Cryogenic electron microscopy was then used to derive two structures representing S-protein’s prefusion and postfusion states – both derived from a single preparation previously solubilized in detergent.

The cell-cell fusion assay was utilized to quantify the fusion activity mediated by SARS-CoV-2 S-protein. Structure determination was carried out by rounds of three-dimensional classification, refinement, and masked local refinement. All experiments were performed with a Biacore 3000 system, which is used for real-time biomolecular interaction analysis by surface plasmon resonance technology.

S-protein as a key player in membrane fusion

This study has identified a structure in the vicinity of the fusion peptide called the fusion peptide proximal region (FPPR), which prompts the fusogenic structural rearrangements of S-protein. Nonetheless, certain questions are open regarding membrane fusion, since the regions near the viral membrane are still not evident in the reconstructions – even in the structures obtained by the Harvard authors with a full-length S construct.

It has been shown how spontaneous structural transformation to the postfusion state under mild conditions is independent of target cells. The prefusion trimer (3.1-Angstrom resolution) forms a steadfastly packed structure with three receptor-binding domains, substantially different from recently published structures of a stabilized S-ectodomain trimer.

Conversely, the postfusion conformation (3.3-Angstrom resolution) is a robust tower-like trimer decorated by N-linked glycans (i.e., oligosaccharides attached to a nitrogen atom) along its long axis with more or less even spacing – suggesting a possible association with mechanism protecting the virus from unfavorable external conditions and host immune responses.

Whether other viral proteins (such as M-protein) may aid in stabilizing the spike by interacting with the heptad repeat 2 remains an intriguing question. “We still need a high-resolution structure of the intact S-protein in the context of the membrane and other viral components to answer the various open questions,” explain study authors.

The most unanticipated finding from the current study is the notion that the kinetic barrier for the conformational transition relevant for viral entry is surprisingly low for this S-protein. Hence, further investigation is needed to elucidate whether this observation relates directly to successful membrane fusion or infection, and perhaps effective human-to-human transmission. 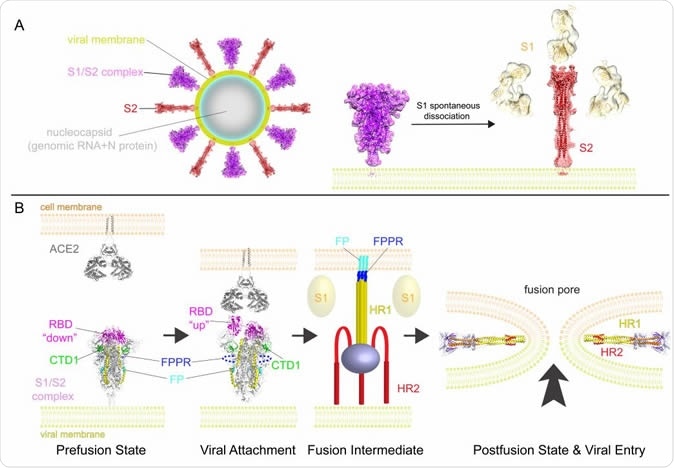 A model for structural rearrangements of SARS-Cov-2 S protein. (A) Structural changes independent of a target cell. We suggest that both the prefusion and postfusion spikes are present on the surface of mature virion and the ratio between them may vary (diagram of virion). The postfusion spikes on the virion are formed by S2 after S1 dissociates in the absence of ACE2. (B) ACE2-dependent structural rearrangements. Structural transition from the prefusion to postfusion conformation inducing membrane fusion likely proceeds stepwise as follows: 1) FPPR clamps down RBD through CTD1 in the prefusion S trimer, but it occasionally flips out of position and allows an RBD to sample the up conformation. 2) RBD binding to ACE2 creates a flexible FPPR that enables exposure of the S2’ cleavage site immediately upstream of the adjacent fusion peptide (FP). Cleavage at the S2’ site, and perhaps also the S1/S2 site, releases the structural constraints on the fusion peptide and initiates a cascade of refolding events in S2, probably accompanied by complete dissociation of S1. 3) Formation of the long central three-stranded coiled-coil and folding back of HR2. 4) Formation of the postfusion structure of S2 that brings the two membranes together, facilitating formation of a fusion pore and viral entry.

It seems that a safe and effective vaccine represents the only viable option to reduce or eliminate the threat of SARS-CoV-2 adequately. The early round of vaccine candidates played with various forms of the S-protein, primarily inspired and modeled on those designed against the original SARS-CoV and MERS-CoV viruses.

However, some sobering insights surfaced from the development of SARS-CoV vaccines, suggesting that certain S-protein-based immunogens generate harmful immune responses to lungs or liver in animal models, as well as an immune enhancement or antibody-dependent enhancement of infectivity that makes the infection even more acute.

“It will be critical to define structural determinants that distinguish the ineffective or deleterious responses from the protective responses, to refine next-generation vaccine candidates,” caution study authors. “Refined immunogens will be particularly critical if SARS-CoV-2 becomes seasonal and returns with antigenic drift, as do influenza viruses”, they add.

Even though virus-encoded enzymes (such as proteases or RNA-dependent RNA polymerase) are outstanding therapeutic targets, fusion inhibitors that inhibit conformational changes of S-protein may also be budding drug candidates. Such fusion inhibitors may even be superior, as (akin to antibodies) they do not need to cross cell membranes in order to reach their target.

Furthermore, S-protein functions uniquely without any obvious cellular homologs, making it a more probable target for highly specific inhibitors with fewer side effects when compared to viral enzyme inhibitors. For example, the same research group has recently identified several small-molecule fusion inhibitors against HIV envelope spike, which was guided by a neutralizing antibody.

“Our work, which represents one of many complementary studies, may guide our responses to the spread of SARS-CoV-2 in a more rational way than would have been possible even a few months ago”, conclude study authors. These insights may prove very useful for combined strategy in developing both the vaccine and an efficacious drug.