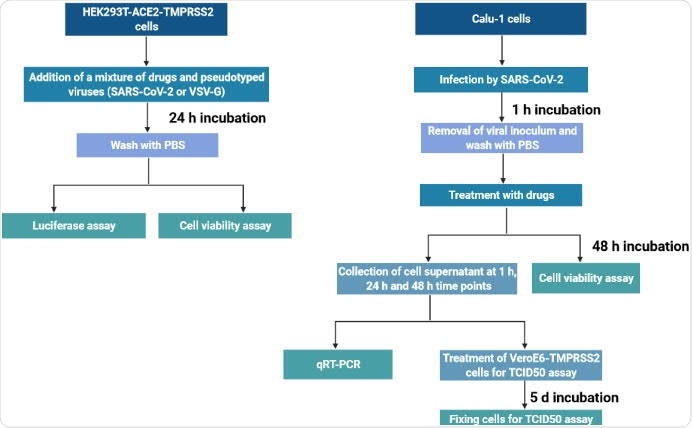 Coronaviruses are members of the enveloped RNA virus family Coronaviridae, and they infect multiple species, from birds to mammals. Apart from the human coronaviruses causing common colds, the severe acute respiratory syndrome coronavirus (SARS-CoV) and Middle East respiratory syndrome coronavirus (MERS-CoV) have a high level of pathogenicity and have caused epidemics in 2003 and 2012, respectively. SARS-CoV-2 caused the currently ongoing COVID-19 pandemic that emerged in late 2019 in Wuhan, China, and infected millions of people across the globe.

Scientists worldwide have been investigating this virus more closely and found that the virus had spread to the lungs, liver, kidneys, heart, brain, and blood in patients who passed away due to COVID-19. Studies also show that the SARS-CoV-2 spike protein (S protein) present in the viral envelope is one of the most critical parts of this group of viruses due to the role of the S protein in viral attachment, entry, and fusion to host cells. Angiotensin-converting enzyme 2 (ACE2) is a protein on the host cells’ surface that is recognized by the SARS-CoV spike protein. The virus binds to ACE2 using a distinct location called the receptor-binding domain (RBD) in the spike protein and thus gains entry to target cells.

Repurposing existing antiviral drugs is a key strategy in our efforts to develop effective therapies to tackle the consequences of COVID-19. Several recent studies have investigated the impact of psychoactive drugs on SARS-CoV-2 in cell cultures and in clinical practice. Researchers from Finland, to expand on these studies, tested some of these drugs against the new SARS-CoV-2 variants. The study is published on the preprint server bioRxiv*.

Protocols that were followed for infection, treatment, sample collection and assays.

The team chose several antidepressant and antipsychotic drugs with different primary modes of action and tested them against SARS-CoV-2 spike protein-dependent infection by pseudoviruses in human embryonic kidney cells expressing ACE2/TMPRSS2.  Some of these molecules were also tested against the B.1 lineage of SARS-CoV-2 and the newer variants, B.1.1.7 and B.1.351, in Calu-1, a human lung epithelial cell line. 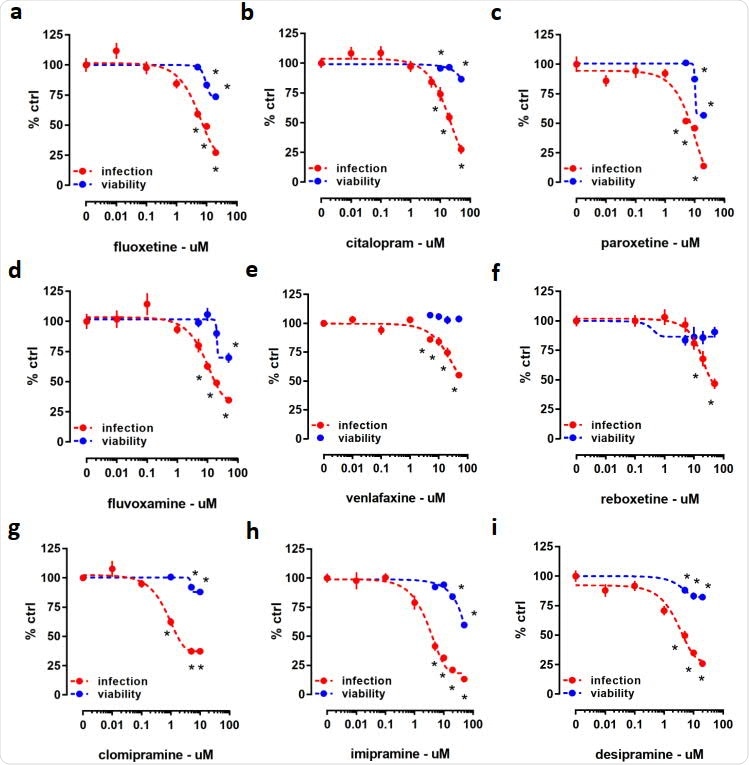 Several clinically prescribed antidepressants, including citalopram, fluoxetine, imipramine, and reboxetine, as well as antipsychotic compounds such as flupenthixol, chlorpromazine, and pimozide, were found to be capable of inhibiting infection by pseudoviruses with minimal impact on cell viability. The antiviral activity of many of these drugs was tested in Calu-1 cells against the B.1 SARS-CoV-2 lineage.

In contrast, in the pseudovirus model, the anticonvulsant carbamazepine, and antidepressants ketamine and its derivatives as well as MAO and phosphodiesterase inhibitors phenelzine and rolipram, respectively, showed no activity. Moreover, fluoxetine was effective against pseudoviruses with the K417N, N501Y, and E484K spike mutations, and the SARS-CoV-2 variants – VoC-1 (B.1.1.7) and VoC-2 (B.1.351).

These results show the potential of these widely used antidepressants and antipsychotics against infection by SARS-CoV-2 and its new variants. Thermal shift assays and X-ray diffraction studies revealed specific interaction sites for drugs including clomipramine, imipramine, thioridazine, sertraline, and paroxetine, on EBOV glycoprotein.

“It is plausible to argue that antidepressants, as well as related-psychoactive compounds, can be considered as an alternative treatment method for people infected with these variants of SARS-CoV-2.”

According to the authors, the findings of the study confirm data from previous studies and expands information on the repurposing of these compounds to treat SARS-CoV-2 infection, including the new variants of concern. Overall, this data combined with data from other recent studies show that safe and clinically approved antidepressants might be additional tools in the fight against the COVID-19 pandemic.

“Similar strategies can be followed to address whether these drugs can bind to SARS-CoV-2 S protein directly.”

bioRxiv publishes preliminary scientific reports that are not peer-reviewed and, therefore, should not be regarded as conclusive, guide clinical practice/health-related behavior, or treated as established information.