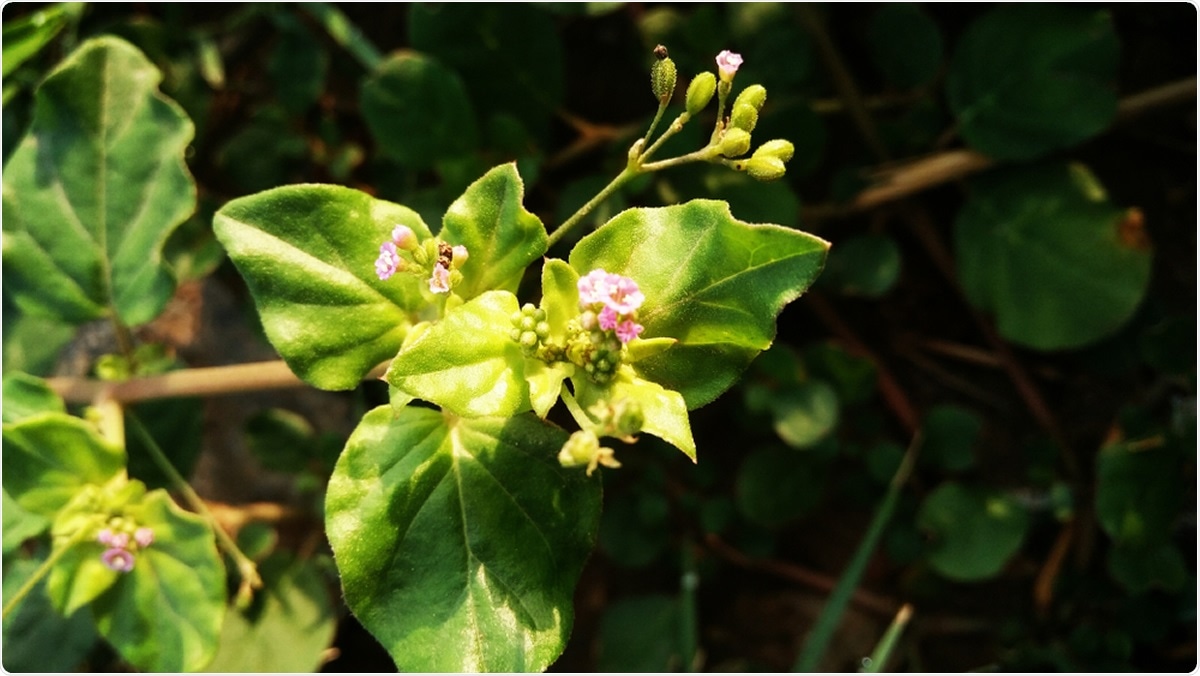 The main protease found in coronaviruses is the 3C-like protease (3CLpro), corresponding to non-structural protein 5, one of the sixteen non-structural proteins encoded by the severe acute respiratory syndrome coronavirus 2 (SARS-CoV-2) genome. 3CLpro is involved in post-translational modification and is vital to the replication of the virus, thus makes an attractive drug target.

Several companies and research groups have been searching for suitably docking ligands that inhibit the function of this protein. In a research paper recently published to the Springer journal VirusDisease by Surya & Praveen (March 6th, 2021) in silico docking simulations towards 3CLpro have been performed, focusing in particular on natural products obtained from the plant Boerhavia diffusa.

Boerhaavia diffusa is a species of flowering plant in the four o’clock family which is commonly known as punarnava, red spiderling, spreading hogweed, or tarvine. Image Credit: Hem Stock / Shutterstock

Boerhavia diffusa is sometimes taken as a herbal medicine for pain relief and other uses, and some evidence suggests that it could provide some minor health benefits.

The phytochemicals within the plant are diverse, consisting of a variety of isoflavonoids, xanthones, steroids, and other complex biological molecules, in addition to being rich in vitamins B and C.

The group selected nine major phytochemicals present in the plant and simulated docking with 3CLpro of both SARS-CoV-2 and MERS-CoV, finding that three had favorable docking energies and could potentially inhibit the function of the protein: Biorobin, – 8.17 kcal/mol; Bioquercetin, – 7.97 kcal/mol; and Boerhavisterol, – 6.77 kcal/mol.

Further computational analysis to assess the adsorption, distribution, metabolism, excretion and toxicity properties of the three molecules was performed, accounting for factors such as hydrophobicity and comparative structural similarity to known compounds to estimate these properties.

Biorobin and Bioquercetin each contain a large number of external hydrogen bond donors and acceptors, and molecular weights over 500, suggesting that they would make poor drugs.

Boerhavisterol, on the other hand, was suggested to make an efficiently adsorbed and distributed non-toxic candidate. The estimated inhibition constant of the drug towards 3CLpro was 10.98 µM, around ten-fold poorer than the two other lead drugs.

Interestingly, none of the tested compounds showed favorable binding energies with the MERS-CoV 3CLpro, suggesting that although the proteins are structurally similar across coronaviruses, they differ in sequence around the relevant binding pockets with these molecules.

This preliminary study has highlighted a small group of compounds that could potentially inhibit the vital function of 3CLpro in SARS-CoV-2, though significant in vivo and in vitro work remains before the candidates can be verified in terms of efficacy and safety.