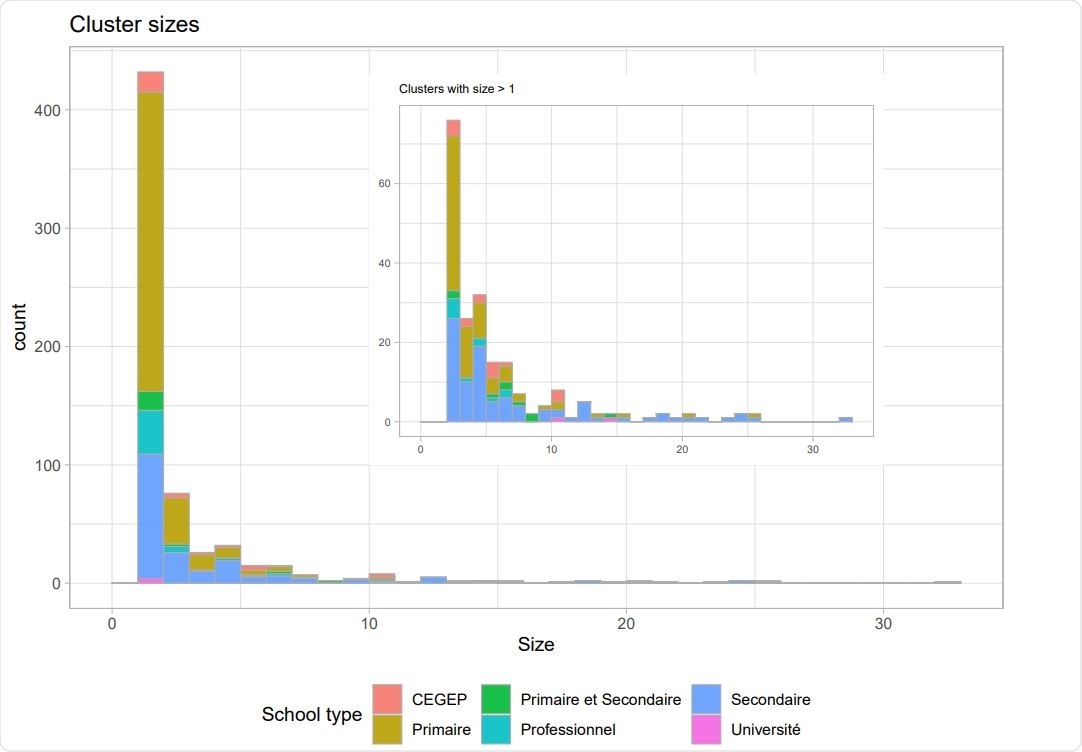 Researchers at Simon Fraser University in Canada have warned that within the school setting, even small differences in individuals’ contribution, their environment, and their activities to the transmission of severe acute respiratory syndrome coronavirus 2 (SARS-CoV-2) result in highly variable sizes of transmission clusters.

SARS-CoV-2 is the virus responsible for the current coronavirus disease 2019 (COVID-19) pandemic that continues to sweep the globe posing a significant threat to global public health and the economy.

The team’s modeling study also found that none of the mitigation measures initiated to control viral spread once a symptomatic individual tested positive was effective at preventing large transmission clusters.

Study authors Paul Tupper and Caroline Colijn say that the only measure that does appear to be effective at accomplishing this prevention is rapid universal onsite monitoring.

The researchers also say the findings could apply to other settings where individuals spend many hours with the same group of 20 to 30 people, such as the workplace.

The paper is available on the server medRxiv*, while the article undergoes peer review.

As part of efforts to control the COVID-19 pandemic, many countries implemented widespread intervention measures, including school closures. However, there is significant uncertainty surrounding the role children and schools play in the transmission of SARS-CoV-2.

Studies conducted during the early stages of the pandemic indicated that children were unlikely to be very infectious.

However, a growing body of evidence suggests that children and adolescents can acquire and transmit SARS-CoV-2 in the school setting and that large transmission clusters and outbreaks can occur.

Schools started to reopen with mitigation measures in place

Given the damaging and costly impact of school closures, many countries have started to reopen schools while ensuring control measures are in place.

A range of mitigation approaches are being used to limit viral spread within the school setting and transmission to the broader community.

It is essential to understand how much and via which routes transmission occurs in the classroom environment so that the costs of schools opening versus staying closed can be accurately weighed and so that the most effective interventions can be identified.

“If we are to maintain open schools, it is necessary to prevent large school transmission clusters, even if they are expected to be rare,” said the researchers.

What did the researchers do?

Tupper and Colijn used a stochastic individual-based model, which enabled them to consider the different observations made so far regarding cluster sizes and control measures.

The transmission was modeled on the elementary school and high school settings in British Columbia once schools had reopened in September 2020.

What did the study find?

None of the implemented interventions due to a symptomatic individual testing positive for infection were effective at preventing large transmission clusters, even when all pupils in the class self-isolated following the individuals’ positive result.

The researchers say the findings point to three main ways in which transmission could be prevented.

The authors say that regular testing of all individuals, irrespective of whether they have symptoms, is more effective than only testing symptomatic people.

“Rapid regular universal monitoring is far superior in preventing large clusters to testing that is initiated upon detection of a symptomatic case, even if a whole class is then tested soon afterward,” they write.

Finally, steps should be taken to control the environment’s potential contribution to the variation in transmission rates. Data could be gathered on classroom size and organization, ventilation, and student numbers, for example, this data is further linked to follow-up studies on cluster size.

The findings apply to other settings

The researchers say that although this study focused on the classroom setting, the model used here could apply to other settings where people spend many hours per day together in groups of around 20 to 30 and have close contact with a subset of this group.

“Many workplaces may be well represented by our model and conclusions,” suggests the team.

Gastric Acid Physiology (Secretion, Ulcers, Acid Reflux and Treatment)
CFTR modulator can be safe, well-tolerated for younger children with common form of cystic fibrosis
India’s rich are not the only ones fleeing the Covid crisis on private jets, says CEO
Damage to the white matter is more predictive of cognitive impairment after brain injury
Gesture and speech go hand-in-hand in twins’ early language development, show studies